Point and Figure Charts (PnF) are another example of a chart type that relies solely on price movements and not time intervals during the creation of the chart. In this way, PnF Charts are similar to Renko, Kagi and Line Break Charts. In a basic understanding of PnF Charts, you can understand that they are comprised of a series of columns made from either X's or O's. X columns represent rising prices, while columns consisting of O's denote falling prices. Point and Figure Charts were originally popular in the early 1900s, before the prominence of computer based charting. They were a way for technical analysts to chart large amounts of data in a short period of time. With the rise of computers, PnF Charts fell out of favor for quite a while. However, more recently, PnF Charts are once again gaining popularity. Overall, there is a renewed interest in "noise filtering" charts, which solely focus on price movements.

The X's and O's that make up each column occupy a space called the Box Size. The box size is a user determined value. When price moves enough in the same direction as the current column, a new X or O is added to that column. When price closes far enough away in the opposite direction, a new column begins with either an X or an O (The opposite of the previous column). The amount that price must move is determined by the reversal distance. This value is created by multiplying the box size by another user defined value, the Reversal Amount. The reversal amount is the number of bricks price must move in order for a new letter to be drawn or a new column to be created. Therefore if the box size is set to 1 ($1) and the reversal amount is set to 3, then price must move $3 in order for a new letter to be added to the chart.

There are two rules regarding the letters and columns.

There are four different types of lines that can be drawn within a PnF Chart.

There are two different methods for calculating reversal distance:

Uses of Point and Figure Charts

As with the other previously mentioned noise filtering charts, Point and Figure Charts are gaining in popularity because they do not factor in time or minor, naturally occurring price movements. Proponents of these types of charts believe that this characteristic makes it easier for users to spot trends and anticipate future price movements. For example, Point and Figure charts are great for visualizing trend lines, support and resistance levels and breakouts.

Trend Lines — Point and Figure Charts were originally drawn by hand on graph paper. Because of their nature, 45 degree(ish) trend lines can form naturally. These lines are a good way to identify overall trends, which can be beneficial on their own as well as with additional tools or indicators.

Support and Resistance Levels — frequently, when using Point and Figure Charts, trading ranges appear when bars are generated between levels of support and resistance.

Breakouts — breakouts occur when boxes begin to generate in a defined direction after a period of trading within a support and resistance bound trading range. 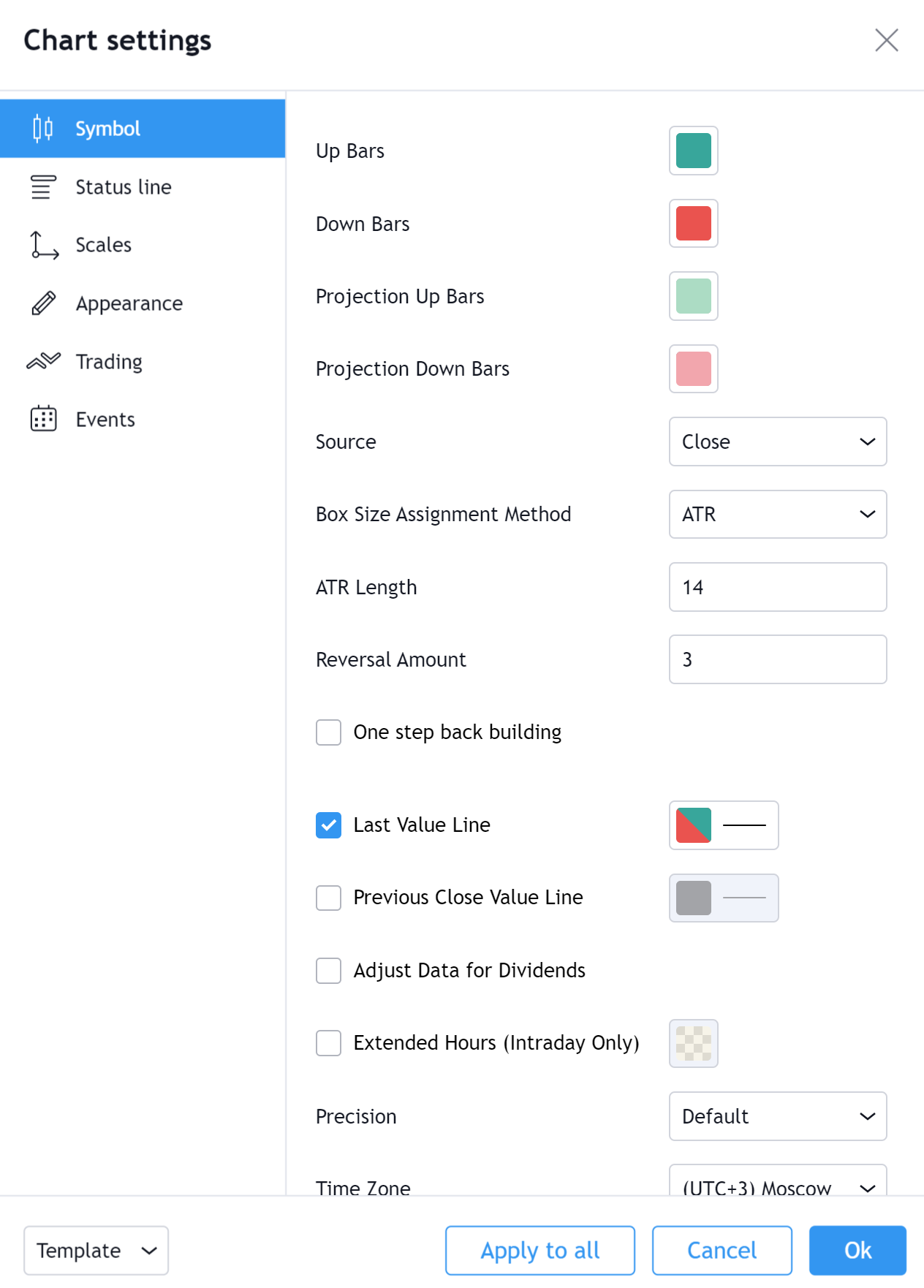 Up Bars — change the color and outline of Up Bars.

Down Bars — change the color and outline of Down Bars.

Source — determines what data from each period will be used in calculations. Close is the default.

ATR Length — if ATR is the selected calculation method, this value will set the ATR look-back period. 14 is the default.

Reversal Amount — if Traditional is the selected calculation method, this value is the user defined reversal amount.